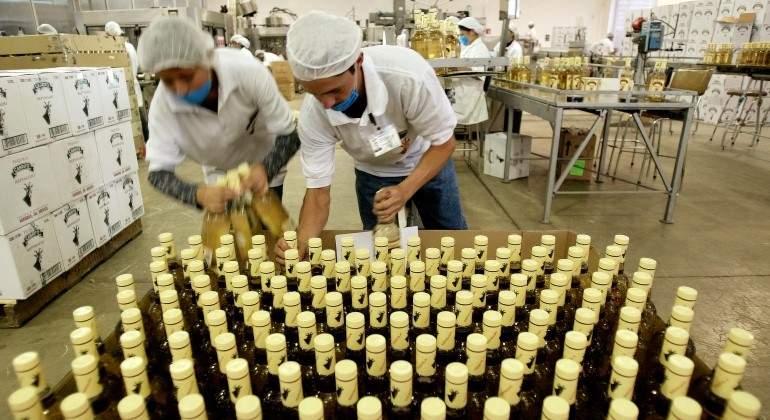 Mexico’s exports grew 2.9% at an annual rate during October of this year, adding up to its second month of recovery after registering a six-month negative streak.

According to timely information on the merchandise trade balance, in the month in question, the value of merchandise exports reached 41,945 million dollars , a figure made up of 40,660 million of non-oil exports and 1,284 million of oil exports.

Growth in the month is supported by a 4.5% rise in non-oil exports and a 30.2% decrease in oil exports, reveals the information published by the National Institute of Statistics and Geography (Inegi).

Within non-oil exports, those directed to the United States advanced at an annual rate of 4.7% and those channeled to the rest of the world did so at 3.2%.

In the monthly comparison, total merchandise exports reported a monthly growth of 4.81%, which was the net result of an advance of 5.29% in non-oil exports and a drop of 7.17% in oil companies.

By type of merchandise, exports of manufactured products reached 38.335 million dollars, which represented an increase of 3.5% at the annual rate.

The most important annual variations were observed in exports of mining and metallurgy products (13.3%), automotive products (12.8%), food, beverages and tobacco (8.4%) and plastic and rubber products (3.9%).

In turn, the annual increase in exports of automotive products was derived from increases of 15.4% in sales channeled to the United States and 1.4% in those directed to other markets.

The value of agricultural and fishing exports was 1,452 million dollars, an amount that implied an annual advance of 5.7%.

In contrast, the most relevant annual setbacks occurred in frozen shrimp exports (-18.2%) and avocado (-11.1%).

As for extractive exports, these were located at 873 million dollars with an annual rate of 66.4%.

In the accumulated January-October, the value of total exports was 336,187 million dollars, which meant an annual decrease of 12.6%. This rate was a reflection of reductions of 11.2% in non-oil exports and -35.9% in oil exports.

Imports
On the import side, these reached an annual value of 35,721 million dollars , an amount that implied an annual reduction of 13.8%. This figure was a reflection of declines of 11.7% in non-oil imports and 33.4% in oil imports.

When considering imports by type of good, imports of consumer goods totaled 4,051 million dollars, a figure that translated into an annual decrease of 34.4%.

Regarding the imports of capital goods, in the reference month, these reached 3,213 million dollars, which implied an annual decrease of 18.3%.

With series adjusted for seasonality, total imports showed a monthly rise of 1.26%, which was derived from increases of 1.20% in non-oil imports and 2.04% in oil imports.

Balance of trade
The trade balance for October shows a record trade surplus of 6.224 million dollars, a balance that compares with the deficit of 688 million dollars obtained in the same month of 2019.

“It is worth mentioning that, in the last five months, four trade balances have been historical surpluses, which makes evident a more accelerated recovery in external demand relative to domestic,” said Gabriela Siller, director of Economic-Financial Analysis at Banco BASE. .

In the first ten months of this year, the trade balance presented a surplus of 25.182 million dollars