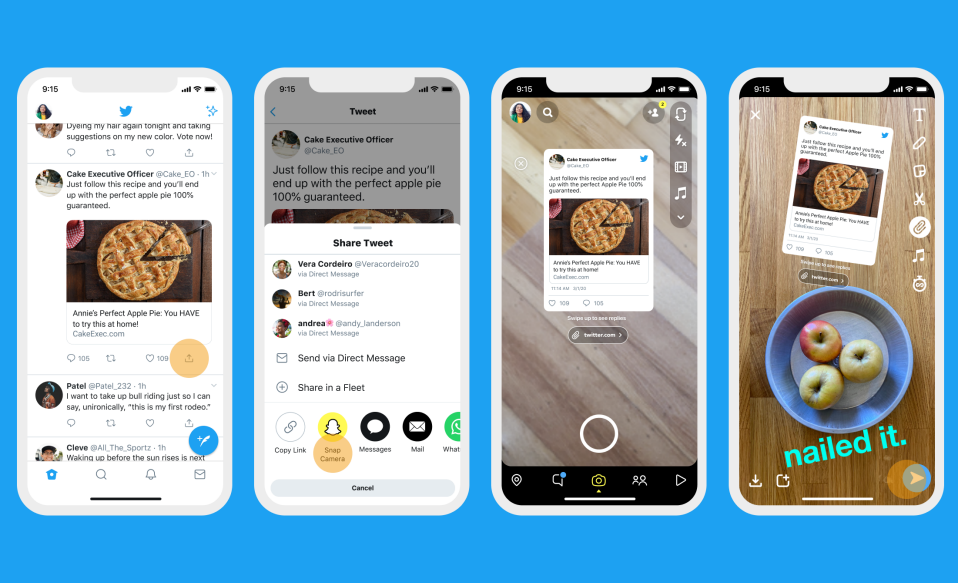 Twitter continues to evolve. The social network, which added the Fleets tool a couple of weeks ago , has begun to allow users of devices with the iOS operating system , that is, iPhone, to directly share public tweets through their Snapchat accounts .

In turn, the platform has stated that this functionality will be tested in the Stories of Instagram in the coming days, and also is working to make it compatible with Android .

“Now more than ever, people come to Twitter to see and talk about what is happening in the world. Sometimes a tweet is so important or so funny that it needs to be shared outside of Twitter, and we’ve seen a trend of people capturing and pasting tweets in order to post them elsewhere.

But this conversation shouldn’t be possible in one place, it should be possible anywhere you want to talk about it. Today’s update makes it easier and faster to share tweets on other platforms and connect more people to the conversations that take place on Twitter, “explains the social network in a statement sent to ABC.

Twitter emphasizes that this is the first time that a tweet can be shared visually with Stories , while still accessing the camera and Snapchat’s full set of creative tools. Viewers on Snapchat can tap the attachment to view both the tweet and the responses directly in the Blue Bird app.

To share a tweet on Snapchat, the user with an iOS device must enter the bird’s social network and click on the message they want to share, which must be public for it to be possible. After this, you have to “click” on the “Share” icon, which is housed in the lower left corner of the tweet in the shape of a square with an arrow inside it pointing upwards.

After this, you will see that among the sending options, in addition to the names of some users that you follow on the platform, there are several applications, including Snapchat.

If you are connected to the instant videos “app” on your device and you are not creating any Snap, the Snapchat “app” will open directly from the Camera and the Tweet you want to share will appear at the top of the Camera as a sticker fixed. There you can edit the content before sharing it by increasing the size of the tweet and adding text or emoticons.