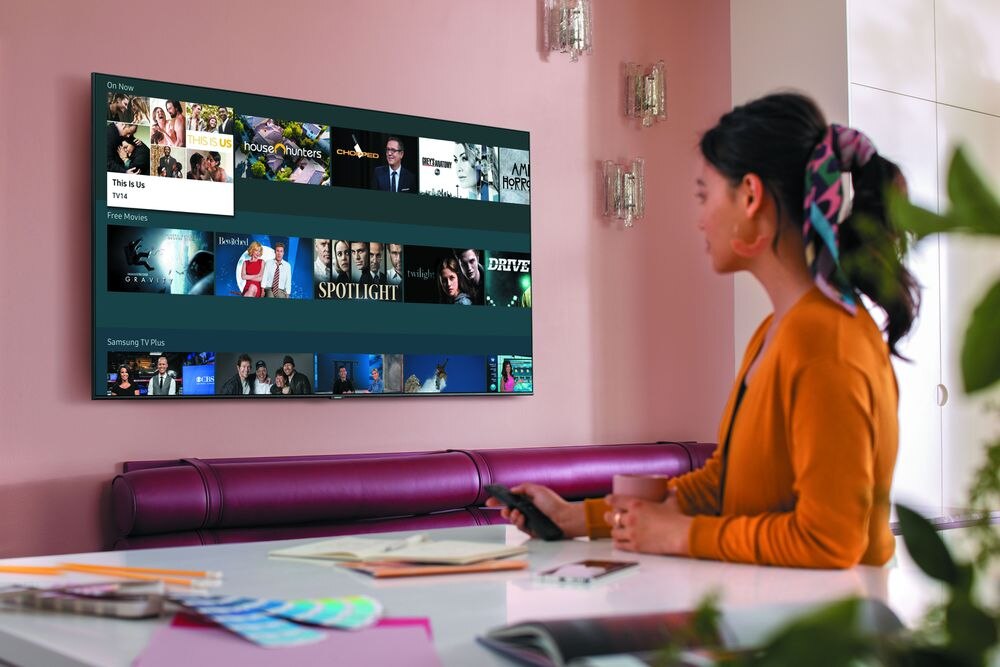 The parties that are to come will be radically different from those we have known before. There will be no large company dinners, meetings between friends will be reduced and, above all, it will be difficult to gather several family nuclei in the same place.

In this context, large televisions are revealed as a magnet to bring together people living under the same roof and to build virtual bridges between families separated by the pandemic.

The television brings new entertainment formulas. Now, streaming offers the opportunity to watch movies and series on demand or to choose the sporting events that interest us. Without forgetting the increasingly relevant role of video games.

But large televisions offer other benefits suited to these confinement times. One of them is its use as a huge panel for video conferencing, something that will surely be used to bring families together virtually on the most important days of the upcoming holidays.

The increase in size has only been possible due to a higher resolution, provided by 4K and 8K technologies . “At a higher resolution, it allows you to have larger screens without seeing the squares, which are the pixels,” explains Carlos Llorens, professor at the Autonomous University of Barcelona and specialist in audiovisual communication.

“On a small screen, the resolution is not that noticeable. The size of the screens grows to be able to perceive these high resolutions ”.

As a result, a large TV today enables a more powerful viewing experience and better enjoyment of content. Aware of these factors, Samsung offers a range of large-inch QLED televisions , ranging from 65 to 85 inches, with 4K and even 8K resolutions .

“The larger the size and resolution, the image quality and the audiovisual experience are destined to improve,” says Rafael Melendreras, professor at UCAM (Catholic University of Murcia) and co-author of the Ultra TV User Guide. high definition and hybrid DTT .

“In turn, new content and programs are developed in a conscious way to take full advantage of the best technical characteristics of the receivers.”

With the pandemic, which has brought confinements and an increase in the time we spend at home, the role of the television has expanded. The consumption of television, in all its formats, has increased.

According to Comscore data for the United States, its use reached a peak in April, with the month of restrictions, to fall again in the de-escalation and rebound with the outbreaks. Inertia can be taken as a reference for what is about to happen in many places at Christmas.

“Television has become the great ally of confinement. It provides us with the escape valve for entertainment and content. The consumption of platforms like Netlflix has skyrocketed ”, Llorens points out.

This is a trend that reflects a JP Morgan study on media consumption during the first months of the pandemic. In the first quarter of the year, 15.8 million people subscribed to Netflix, while JP Morgan had forecast growth of 8.8 million subscribers.

Consumption of streaming has driven the use of televisions. And everything indicates that at Christmas the inertia will accelerate. “Surely it will be the main entertainment of society,” says Llorens, referring to the upcoming festivities.

One of the fields in which having a high-resolution large screen is most appreciated are series and movies. “ At higher resolution we will be able to notice smaller details , that is, to perceive objects or things of smaller size more clearly. The larger the size of that screen, those details will become even more visible ”, Melendreras says.

The role that the television will play on these dates will be mediated by streaming premieres and by the efforts of television programming. National chains are already preparing their Christmas specials. At the same time, the upcoming parties will be decisive for streaming .

Disney announced that it will release Pixar’s new film, Soul, directly on its platform, Disney +. Netflix, meanwhile, has planned 17 premieres, between films and Christmas episodes of its series.

A larger size and resolution will help to enjoy all this new content, much of it filmed with careful production. Llorens emphasizes the factor of spectacularity. “We all want to have the feeling of a cinema screen. Big screens convey that cinema feel .

And not only in cinema, but also in series that are made now, in documentaries like National Geographic and in sports ”. Samsung has recognized this need and is therefore putting a lot of emphasis on 8K resolutions with a wide range of inches ranging from 55 “to 85”.

Once it is assumed that there will be no great family dinners in the next parties, the alternatives appear. And video calls have proven to be the most effective remote glue. This way of socializing is sure to explode at Christmas.

All kinds of devices will be used, but on occasions of this type, with videoconferences of more than ten, twenty or even thirty people, the comfort of large screens is valued. It is here where large inch televisions can meet another need, that of bringing us all closer.

If there is one type of content that has steadily pushed the deployment of large screens, it has been video games. “The most die-hard gamers want to play in 4K,” says Llorens.

For this it is important that the TV chosen have a input lag very small, and Samsung models feature one of the best latencies market ” consoles make many people play on television screens and, if you want to squeeze the maximum a game , you want to enjoy it in the highest resolution, with the greatest detail, with HDR ”.

All this are factors that lead the user to a more immersive sensation, one of the main objectives when facing a video game.

The new consoles, PlayStation 5 and Xbox Series X, are destined to push the industry. And it is that both support 8K resolutions, in order to provide an ultra high definition (UHD) experience. As always when the next generation of video consoles appears, it is expected that at Christmas they will be one of the most demanded gifts.