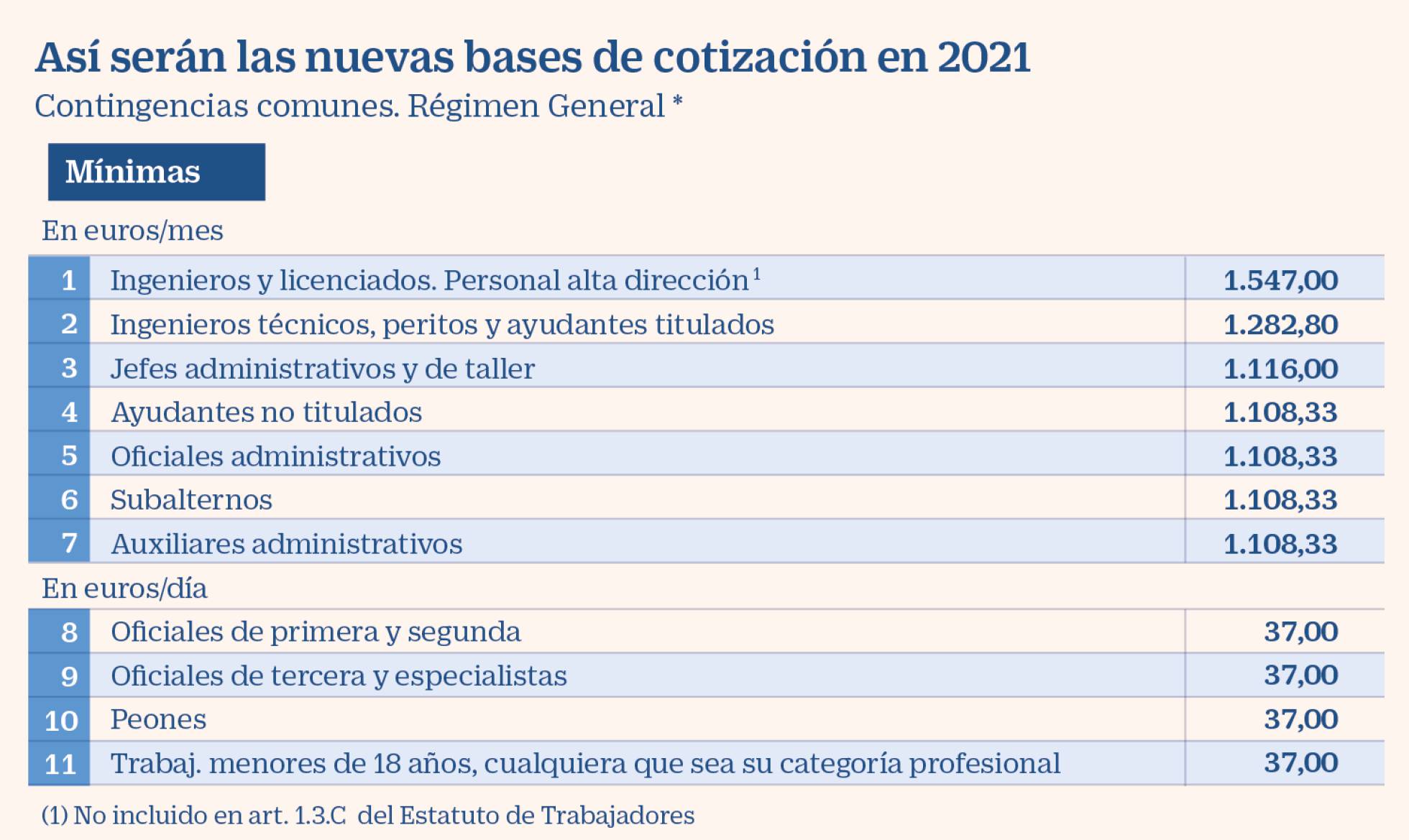 The economic crisis generated by the global pandemic of Covid-19 has dealt a major blow to the coffers of Social Security that has seen its expenses increase due to the payment of extraordinary aid, at the same time that it has registered a significant drop in income due to the disappearance of a million contributors (of which 40% still have to be recovered) and the exemptions of quotas for companies in ERTE and the self-employed.

However, the Government has decided that the way to recover income for Social Security is not the companies, already drowned by the situation. For this reason, the contribution bases to the system paid by employers and, to a lesser extent, workers, will remain frozen in 2021.

At least at the beginning of the year, since the minimum contribution bases are linked by law to the minimum interprofessional salary that , after the internal tug of war experienced within the coalition government, it has remained unchanged for this year.

But the intention of the Minister of Labor, Yolanda Díaz, is to continue negotiating, to try to reach an agreement with unions and employers to raise this minimum wage at some point in 2021. If Díaz succeeds, the minimum contribution bases should rise from automatically in the same proportion as the SMI,

That said, both the amounts of the bases and the contribution rates will be, as of January 1, the same as at present. Thus, in the General Scheme for wage earners –to which more than eight out of ten members belong–, the minimum contribution base will continue to be 1,108.33 euros per month, for the lower groups of the system. Although this amount rises to 1,547 euros, for the minimum Group 1 contribution base (see graph).

Likewise, the maximum base that applies to the highest salaries – and for which around 14% of affiliates contribute – will continue to be set at 4,070.10 euros in 2021.

Those who foreseeably will raise the contribution rates this year and, therefore, will pay more to Social Security, is the group of self-employed workers. According to a 2018 agreement between their representatives and the Government, the rates of contribution for cessation of activity would go from 0.7% in 2019, to 0.8% in 2020 and 0.9% in 2021. rates for professional contingencies would increase from 0.9% in 2019 to 1.1% in 2020 and 1.3% in 2021.

However, due to the pandemic, Social Security did not apply the 2020 hike until last October. That month, the rise of three tenths placed the total contribution rate at 30.3%, with which the minimum installment increased by three euros to 286.15 euros per month, while the maximum did so to 1,233 euros, 12 more per month.

Now, according to official information handled by the association of self-employed ATA, Social Security will reapply the 2021 rise from January (another three tenths) with which the quotas will increase again between 3 and 12 euros per month. And, in addition, this year it will charge them the arrears of between 22 and 98 euros, for not having applied the 2020 increase until last October.