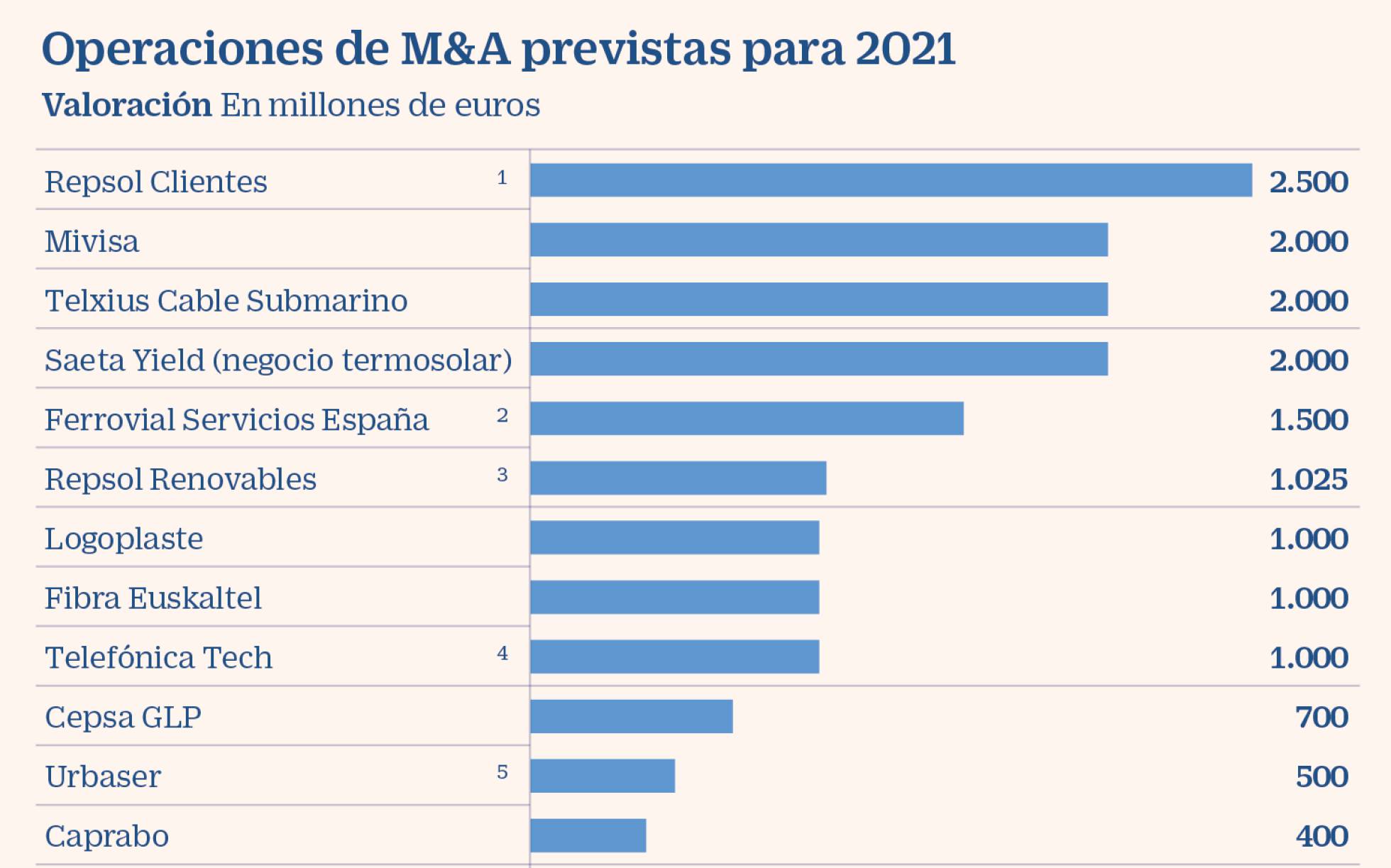 The Spanish market for mergers and acquisitions (M&A, for its acronym in English) went from 100 to 0 in a second in March. And now it warms up engines to reach maximum speed.

Unlike the economy, which experts wait several years to reach pre-crisis levels, investment funds and banks foresee a 2021 of a euphoria unleashed in Spain. So much so that on their table they already have operations pending resolution for this year for a value that exceeds 17,000 million.

The Spanish M&A market experienced the best period in its history in the years prior to Covid. The reason was the ultra-expansive policies carried out by the ECB after the 2008 financial crisis, which have reduced the cost of financing to a minimum.

And it has maximized the liquidity available to private equity funds, the true protagonists of this era. So much so that the investment volume of this asset in Spain marked a historical maximum in Spain in 2019 with more than 8,000 million, according to Ascri data.

It was the perfect storm: companies had the cheapest money ever to grow through purchases, and funds had huge amounts of liquidity to buy assets at as high prices as they wanted.

The confinement declared in March and April in half the world dried up the channel of ongoing operations. This recovered relatively easily after the summer and even the Spanish market could see significant operations such as the purchase of MasMovil by KKR, Cinven and Providence or the takeover of Idealista by EQT.

The macro picture was far from clear, and that weighed on for many companies, but investors raced for companies that could really weather the recession.

“A post-Ccovid-19 environment should bring more important opportunities for private equity funds seeking to invest record levels of available capital. Additionally, many companies will need to restore balance to their balance sheets through equity injections that may come from public or private investors, in this case “, point out from the investment banking team of JP Morgan in Spain, led by Ignacio de la Colina.

The market has already cleared. According to the latest TTR data, Spain closed 1,812 operations until November for an added value of 10,319 million. The number of operations is 22% lower than in the same period in 2019, but its value is 37% higher.

“In the first four months of 2021 we will observe certain signs of optimism in our economy that will be transferred to M&A. European funds will serve to stimulate the market, to a greater or lesser extent depending on the sector to which the investments finally arrive.

In this sense, Everything related to the energy transition and, more specifically, to the world of hydrogen will become even more relevant, “says Enrique Gutiérrez, managing partner of Deloitte’s Financial Advisory.

The market maintains, yes, the veto on the sectors most damaged by the virus, such as tourism or restaurants. But it has been launched to those that have demonstrated a better resilience to diversity, such as renewable energy or health.

“The four sectors that have concentrated market activity in 2020 will continue to be protagonists in 2021: financial, infrastructure, renewables and telecommunications. We expect that in 2021 the trend towards large operations will continue with great strategic relevance for the companies that lead them. . “, says Head of M&A of Barclays in Spain.

In these cases, they are able to pay even higher prices than before the pandemic and accept operations, such as the purchase of minority stakes, until now unthinkable. “Traditional private equity funds are very active and more flexible than ever. Now there are many willing to make minorities and operating structures with a component that is not pure equity”, they complete from Altamar Capital Partners.