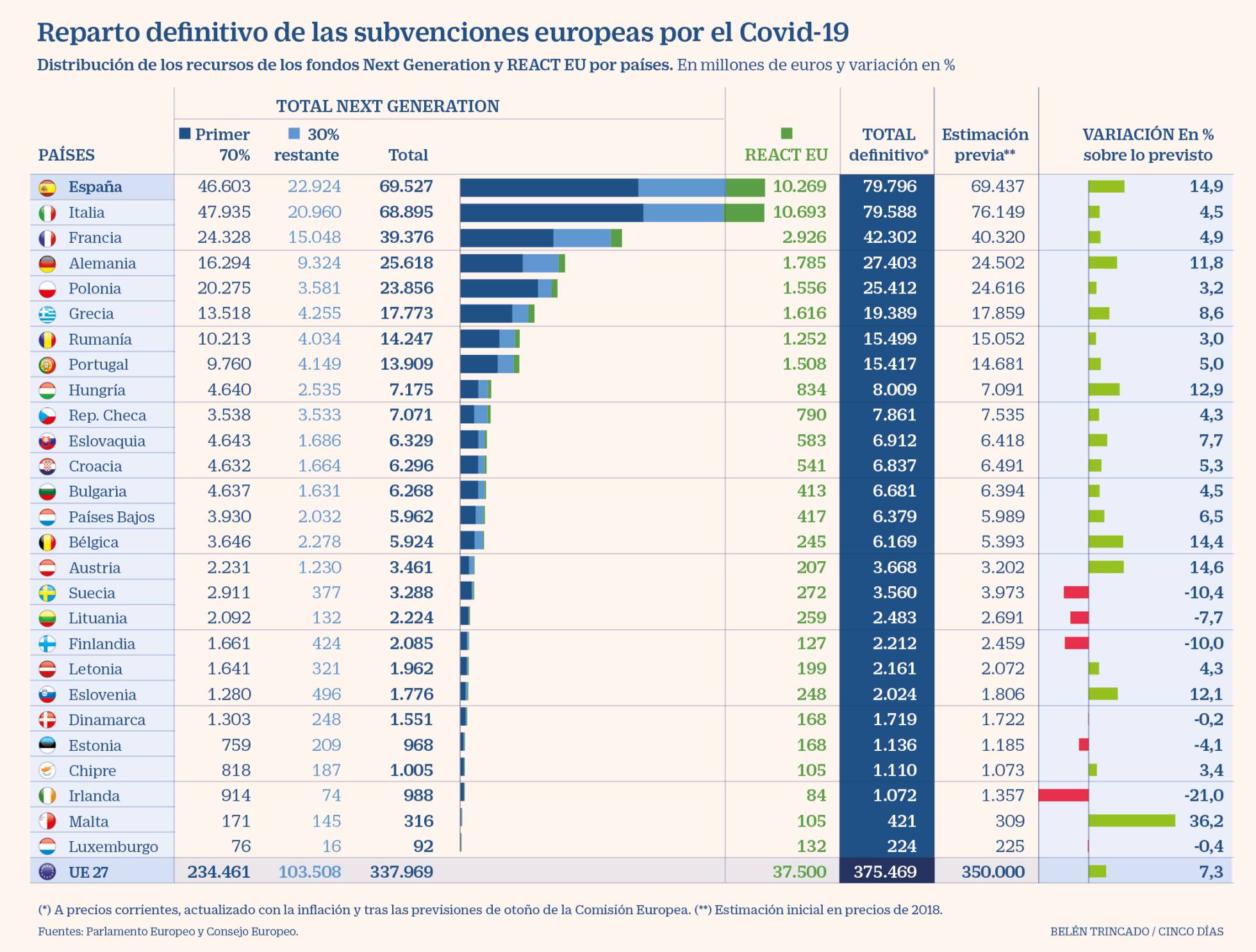 The European Union is preparing to increase the power of the reactor that it will give to Spain to get out of the Covid-19 crisis, gaining greater height than it was when it sank into the economic abyss of the pandemic.

Specifically, the European Parliament will approve, in the coming weeks, a final endowment of 79,796 million euros in subsidies that Spain will receive between this year and 2023.

The figure represents an increase of 10,359 million, almost 15% more than the 69,437 million initially committed, which ends up placing Spain as the country that will receive the highest volume of aid, surpassing Italy for the first time since the stimulus package began to be designed.

The new figures appear in the final regulation of the Recovery and Resilience Mechanism, to which this newspaper has accessed, which, in the absence of translation into all official languages, will be voted on by the European Parliament and sent to the European Council for approval, predictably , in a matter of weeks.

Spanish Government sources explain that a good part of the improvement in the contributions that Spain will receive is due to the fact that the transfers initially announced in May were recalculated in December in light of the forecasts published by the Commission in autumn.

Then, Brussels worsened the outlook for Spain by estimating that its GDP would decline by 12.4% in 2020, compared to the 10.9% previously forecast, which made it the economy most affected by Covid in the entire EU.

It so happens that the Commission had taken into account for its calculations the unprecedented 5.3% quarter-on-quarter drop in GDP up to March and the 17.9% collapse in spring, but not the unexpected rebound of 16.4% in the summer, as the Executive stressed then, when he defended that his forecast that 2020 would conclude with a decline of 11.2% was more reliable. Paradoxically, that worst photograph has ended up benefiting Spain in obtaining aid.

But it is not the only factor. “Spain takes more because the crisis has been greater than expected. That contributes 5,800 million more, but the rest of the increase is due to the increase in inflation “, because the initial figures were expressed in 2018 prices and now at current prices, explains the economist, and Cs MEP, Luis Garicano, who details that the real increase is only 8%.

Of the new allocation for Spain, 46,603 million correspond to the first tranche of the Next Generation fund, for 70% of the total to be distributed. The figure that inflates the original design in this section by 3,000 million.

Another 22,924 million correspond to the payments of the second tranche, for the remaining 30% of the fund, although this amount will be revised in June 2022 depending on the economic evolution. For now it rises by 7,000 million.

The last leg, 10,269 million, corresponds to the ReactEU fund, whose amounts are not modified. The president of the Commission, Ursula von der Leyen, trusted on Friday that the first payments will arrive “before June 30, 2021”, and asked the partners to accelerate the national ratification of the plan.

With the new design, Italy gains 4.5% but remains in second place by amount of funds committed, with a difference of just 200 million compared to Spain. France ranks third, with a total allocation of 42.3 billion, 5% more than in the first plan. Germany, for its part, will reach 24,500 million, with an increase of almost 12%.

The biggest changes, however, come in the form of an increase in Malta, which increases its amount by 36%, to 421 million. On the other hand, Ireland is the one that loses the most, 21% less to add about 1,000 million.

Political crisis. The crisis opened this Friday in Dutch politics after the resignation en bloc of the government of the falcon Mark Rutte puts at risk the final disbursement of funds, pending the approval of the section on resources by the Member States of the European Union (EU) own, a fundamental step so that the Commission can go on to issue debt jointly and be able to mobilize the 750,000 million euros in loans and grants.

Rutte’s executive resigned after a parliamentary report that held him responsible for the mismanagement of childcare subsidies that led to thousands of immigrant families to ruin. In principle, the resignation should not affect to a great extent, since Rutte and his formation, the Popular Party for Freedom and Democracy, lead with a great advantage the voting intention polls of the next elections, which will be held in March.

However, among several MEPs, community sources confirm, there is a certain fear that the small Dutch crisis will disrupt the deadlines set by the European Parliament, the Commission and the Council, already tight after the fierce negotiations with Hungary and Poland that delayed the roadmap set in Europe for several weeks.

The case becomes even more important considering that the Netherlands, and specifically Rutte himself, was one of the toughest partners in the negotiations that, after almost five days, managed to unlock the reconstruction fund in July last year.