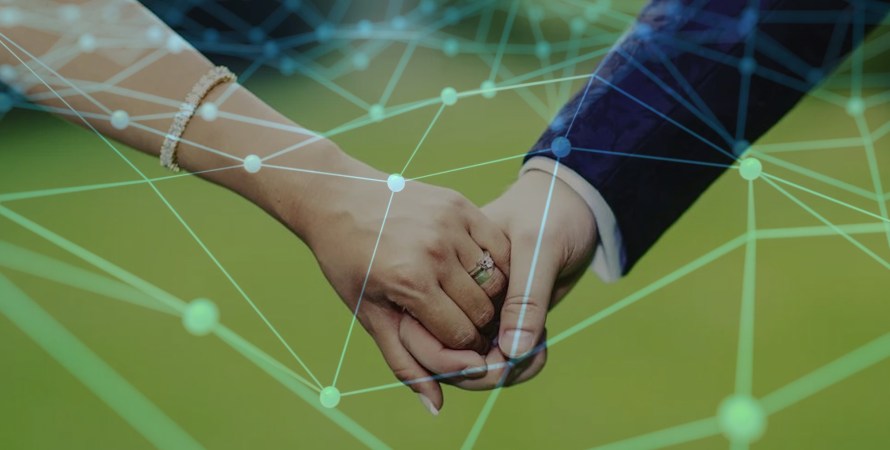 Rebecca Rose and Peter Kacherginsky, employees of the US-based cryptocurrency exchange Coinbase have revealed how they used the Ethereum blockchain to legally marry. On April 3, Rose posted on Twitter that the couple had married on March 14. Both on the physical and virtual planes.

In addition to a traditional Jewish wedding ceremony, Kacherginsky wrote an Ethereum smart contract called Tabaat that issued an NFT of tokenized “rings” in the form of TBT tokens to the couples’ wallets. Tabaat is the Hebrew word for ring.

Kacherginsky created the 2,218-line smart contract on March 10. And, its creation cost 0.25 ETH, which at the time was worth about $ 450. An hour after the contract was created, three more transactions were sent from Tabaat for an additional cost of 0.0048 ETH or $ 87. Which suggests that it costs around $ 537 to tokenize a marriage contract.

The ceremony itself consisted of two transactions: the transfer of the contract’s NFT “rings” to Rose and Kacherginsky. In total, it took 4 minutes for the ceremony to be validated by the Ethereum network, and incurred $ 50 in miner fees.

The NFTs represent an animation of two circles merging to become one. And they were illustrated by artist Carl Johan Hasselrot. On Twitter, Rose said:

“ The blockchain, unlike physical objects, is forever. It is unstoppable, impossible to censor, and does not require anyone’s permission. How love should be. What could be more romantic than that .

Ether price rises to a new all-time high, why?
Fei Protocol blocks $ 1 billion in Ethereum
The launch of the Ethereum-backed stablecoin, called Fei, has locked in nearly $ 1 billion worth of ETH during its genesis event. But the launch has not quite gone as planned for some of its liquidity providers.

The protocol, which launched a genesis event on April 1, introduced a stablecoin that is partially backed by Ethereum and uses peg curves along with direct incentives to maintain the correct peg. These direct incentives penalize price fluctuations away from parity and reward operations that drive prices towards parity.

Messari researcher Ryan Watkins observed the genesis event, which included an airdrop to liquidity providers. More than $ 1 billion worth of Ethereum was locked in due to this protocol mechanic.

This primacy in his portfolio of Bitcoin, the cryptocurrency par excellence, does not hide the “love” that Cuban professes for ETH. In fact, the investor confesses in a recent interview to The Delphi Podcast that Bitcoin is more attractive to him as a store of value than as a currency.

“At first people said that Bitcoin was a currency and I said: It will not work. But all the time I said that it was a store of value in which, if people could believe that it was a better alternative than gold, due to its algorithmic scarcity, the price would go up, “explains Cuban to emphasize below : « Bitcoin is a better alternative than gold and it will continue to be so. That is why I have BTC and that is why I have never sold it .

However, where Cuban concentrates his greatest interest is in Ethereum, the blockchain where ETH is built, the second largest cryptocurrency below Bitcoin that has experienced highs this 2021, mainly due to the smart contracts that are executed on it. .

How about a couple getting married on the Ethereum Blockchain? Let me know in the comment box.