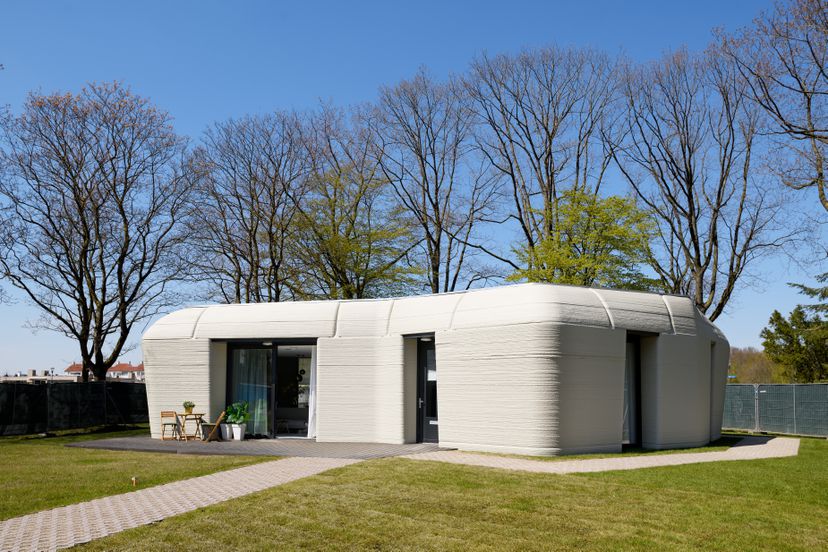 A Dutch retired couple have become the first to occupy a 3D printed house with permission to be legally built and inhabited in Europe. There are other houses of this class, from France to Moscow, and from Dubai to the United States, but only in this one, the material of the structure that supports it has also left the printer.

It is a concrete bungalow in the shape of a rock polished by erosion, to fit into the wooded landscape of the suburb of the city of Eindhoven (Holland) where it stands. It has 95 square meters, a living room and two bedrooms, and the property is the first of a series of five planned on that parcel of land.

The rent costs 850 euros per month, and Elize Lutz (70) and Harrie Dekkers (67), the tenants, assure that it brings a feeling of warmth perhaps little associated with the finish of a 3D printer.

This is how a house is printed in 3D
The handing over of keys to Elize and Harrie has become a continual perched by the front door of the house, and they expressed an admiration “similar to what you might have as a child at Hansel and Gretel’s house.” The small neighborhood to be created with this technology is part of the Milestone Project , in which the Technical University of Eindhoven and the real estate company Vesteda have participated.

Interior of the house built with a 3D printer in the Netherlands.
The university has developed the technology, later transferred to the Saint Gobain Weber Beamix firm, which printed the house. They used a specially formulated concrete that comes out of the robotic arm of the 3D printer , and it took 120 hours to add layers and layers to create the walls and ceiling. Once the quintet of dwellings is completed, the area is expected to resemble a sculpture garden in harmony with the surrounding landscape.

Concrete is a construction material made up of a binder, which is usually cement, mixed with aggregates, water and additives. “What distinguishes this Eindhoven house from other similar initiatives is that 3D printed material is also structural, and has received official permission to do so.

Obtaining concrete leaves a large climate footprint due to the emission of CO2 and we must be more sustainable. One way to achieve this is by designing more complex structures and applying it only where it is structurally necessary ”, says Theo Salet, Professor of Structural Design of Concrete Structures at the Technical University of Eindhoven, who has participated in the project. And he points out that other materials can be added to the concrete production so that it pollutes less,