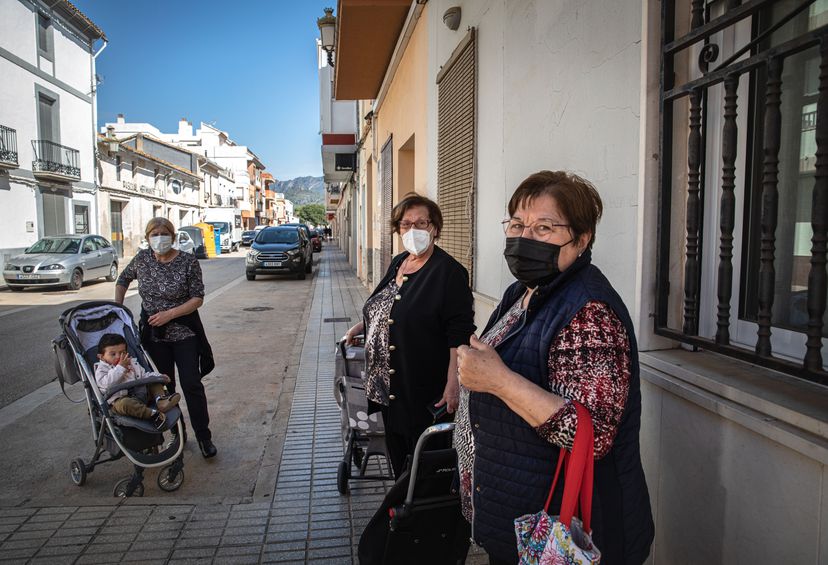 “Aim: not 30 million, but 29 million euros. That’s the money I have, ”an old man says sarcastically. “I already told you that my grandfather knew something,” said the grandson last Friday in front of the only lottery administration of Benifairó de la Valldigna.

You can see that they are used to joking about the sudden wealth of this quiet Valencian population of 1,558 residents registered since the previous day, the National Institute of Statistics (INE) announced the surprising increaseof the average net income per inhabitant of the town.

It went from 11,428 euros in 2017 to 30,682 euros in 2018. This represents an increase of almost 30 million euros if the difference between the two annuities is multiplied by the number of inhabitants. The INE assures that it is not an error.

Some residents are amused and others do not hide their anger at the media attention that this rise has aroused, which places the town with an income higher than that of the three main Spanish cities: Madrid (19,250 euros), Barcelona (19,950 euros) or the nearby Valencia (16,450), from which it is separated by 60 kilometers. At least three years ago, the date to which the data refers. Why?

“Well, I don’t know”, comments Pilar, a neighbor of the town, “because I have received up to seven inheritances and at home we are still the same. Here people are dedicated to the fields, to work in the warehouses. I can not explain”. Her friend Lila, also 77, points out with the same humor: “I, a widow with 500 euros a month of pension that I collect, I have not seen any of that income.”

Surrounded by orange trees and mountains, a landscape that creeps in around any corner, and six kilometers from the sea, Benifairó de la Valldigna is dedicated to agriculture and the fruit trade. “You live very well,” says Salvador Ferrando, “it is a very quiet town, in which we all know each other and no one has won the lottery or the bonoloto, that we know of.

If anything, it must be something from the warehouses. ” Beside him, Jesús Alberola looks impeccable, elegant, at 90 years of age. “I have not worked in my life,” he explains with a poker face. “Never”, ironically corroborates his friend. “He only spent his whole life working in the grape harvest in France, in the construction in Germany, in the orange harvest”, he adds.

In the lottery office, Jesús assures that he has not distributed any important prize, neither recently nor three years ago. Neither is Vicent, the ONCE salesman who runs around town. The lottery makes his own calculations and emphasizes that, being a town with very little population, the average income rises immediately with an income, a purchase or an operation. It underlines the paradox that Benifairó is in the news for his income when “curiously, there is not even a bank branch left, only an ATM”, which is fed weekly.

One of his clients charges the journalists with the same arguments that are later repeated in one of the town’s bars: for simplicity, for giving headlines that imply that now the town is rich by making an average of the income, when That is a deception, because if one wins, it seems that the others also and that is not the case.

From that bar you can see some of the warehouses installed on the outskirts of town that many residents point out when looking for a possible explanation for the increase in rent.

So does the mayor and music teacher Josep Antoni Alberola, from Compromís. Perhaps it is an unknown fact for the vast majority, but Benifairó de la Valldigna is one of the most fruit-exporting towns in Spain, he highlights. “We have an industrial estate that is not very large but it is important, with powerful companies.

We do not have a bank branch, but the banks do go to these companies. The lack of banks worries me because it leaves the population unassisted ”. The town has hardly any unemployment either, with 7%. “We are happy that the people are known, that is positive, but we would be much happier and it would be much more positive if that income were more distributed, of course,” he says.

The mayor does not know if there has been any sale of land, a financial operation or a consolidation movement in the Spanish parent company of the turnover of a subsidiary in another country, as suggested by sources in the agri-food sector, which accounts for the increase in income three years ago. years. But he maintains that it is the most reasonable hypothesis.

Because the possible operations of family businesses can affect the income of their owners and residents of the municipality. The City Council is also not aware that people with a high income have moved to the population.

The largest of the family businesses based in the town is Bollo Internacional Fruits, with a sales volume of more than 100 million euros per year and a subsidiary with farms in Brazil. “The best melons in Spain”, one of its workers comments humorously at esmorzaret time , a Valencian tradition that designates having something more or less light in the middle of the morning, between breakfast and lunch.

The workers do not go into details and highlight the good functioning of the family business founded by José Vercher Cuñat, known in the town with the malnom (nickname) of Bollo. “Next year turns 100,” announces one. Bollo exports to Canada, China and the United Arab Emirates, as well as Spain and Europe.

Also lighting
Frutas Tono, created in the 1970s, also exports a good part of its different kinds of oranges, especially to Europe, including Russia, although the main market is Spanish. Ferrando Blasco is another of the companies installed in Benifairó de la Valldigna dedicated to the fruit and vegetable trade.

The presence of Alverlamp stands out in the polygon because it has nothing to do with the citrus sector, so deeply rooted in the La Safor region, whose capital is the tourist Gandia, where the population is located.

The firm, also an exporter, is dedicated to the design, manufacture and assembly of LED lighting and light points of all kinds in its own facilities. Alberola Verdu SL (Alverlamp) has its registered office in Benifairó, from where it also works with China.

The companies are silent and no significant movement of capital has transpired, such as the one that occurred in 2017. Then, the Barcelona town of Matadepera drew attention in the INE data due to a sudden rise in the classification of income per inhabitant, which was attributed to an operation carried out by the businessman Manuel Lao, a resident of the town, who sold the gaming and slot company Cirsa to Blackstone for 2,000 million euros. A figure very far from those that are handled in the citrus sector.