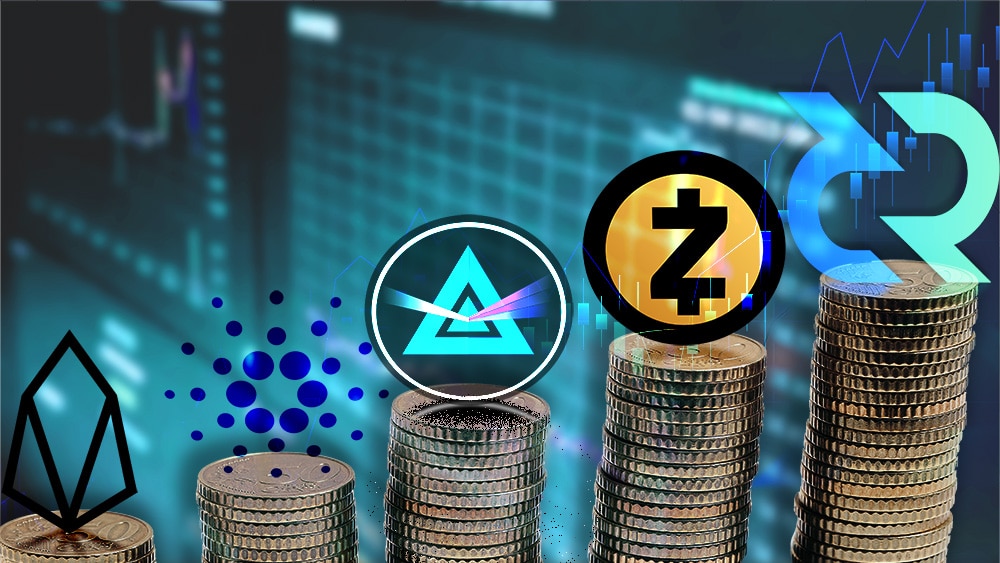 From May 24 to 30, 2021, the cryptocurrency market shows important signs of recovery, after the general decline that was experienced last week amid the correction in the price of bitcoin (BTC). About 90% of altcoins registered increases that reached more than 50%, according to statistics from Coin Check Up.

The weekly top is headed by Decred (DCR) , which this week integrated its native portfolio to its decentralized exchange DCRDEX. They are followed by Zcash (ZEC), which is now accepted in a Chrome browser extension called Moon; and beam (BEAM), which is preparing for a change in its governance system.

All five cryptocurrencies are completed with cardano (ADA) , with the tesnet launch of its Alonzo update ; and EOS , which plans changes to its rewards system.

For its part, the price of bitcoin returns to the rise in these seven days, after the resounding fall on May 19 that brought its value to USD 30,000. On average, the pioneering cryptocurrency surged 4.8% in seven days, to trade at $ 35,580 at time of writing.

In this regard, the most recent analysis by Ecoinometrics pointed out that the upward trend that the cryptocurrency market had been registering has not ended with the strong correction of last week. According to this company’s analysis, what is currently occurring is a typical type of downturn during a post- halving market .

Remember in this sense that we are in the stage after the third halving , which occurred on May 11, 2020. According to Ecoinometrics, the pattern after these events includes a vertiginous rise, followed by strong corrections and successive rises.

Notable news on the network includes that of decentralized infrastructure provider SpaceChain, which announced two space missions scheduled for June this year. The first mission, scheduled for June 3, will focus on moving the Ethereum satellite node to the International Space Station (ISS) aboard SpaceX’s Falcon 9 rocket, as the company announced in a statement.

Other relevant cryptocurrencies by market capitalization are also showing recovery. XRP gained 21% and litecoin (LTC) was up 24%. Meanwhile, Polkadot (DOT) appreciates at 16%; and cardano (ADA) advances by more than 35% to rank fourth in the weekly top.

Decred integrates your DEX into the Decrediton native wallet
According to information released this week in specialized media, the Decred team announced the initial integration between its decentralized exchange, DCRDEX, and its native Decrediton portfolio. The aim of the integration is to promote access to the exchange , launched at the end of last year.

The news was released on May 27, coinciding with the rise of the native cryptocurrency of this network, DCR, which had been on the rise since the beginning of the week. The DCR price ranged between $ 88.17 and a high of $ 154, which it reached on May 27. On average, the cryptocurrency surged more than 54% in seven days.

The integration comes after it was learned that Decred launched a new decentralized autonomous organization (DAO), once the necessary changes were executed earlier this month to decentralize treasury of 87 million dollars. The move gave stakeholders full sovereignty over project funds.

DCRDEX is reportedly among the first exchanges to make use of a new order matching system. They also mention other integrations that they consider key, such as additional security. This is because the servers “never take custody of customer funds and privacy, as it is completely without permission.”

The price of DCR started to rise from May 24th and reached a peak of USD 154 on the 27th. Source: Coin Check Up.

Moon extension users can now pay with Zcash
In recent information, the team at Moon, a Chrome web browser extension that allows you to pay with cryptocurrencies, reported that it already offers support for Zcash. In this way, users of the extension can pay with the privacy-based cryptocurrency through their Coinbase account, in the United States.

Moon notes that the partnership with Electric Coin Company (the company behind Zcash) responds to their interest in privacy, security and open access.

As part of the announcement, the company is returning 5% of any purchase made with Zcash through Moon, up to $ 10 for each purchase. The giveaway will remain active while supplies last.

The market capitalization of ZEC is USD 1.87 billion and the daily trade volume is USD 805 million.

Beam will implement changes to its governance system
In a Beam blog post on May 26, the team notes that it is preparing for the gradual delegation of governance to its new BeamX DAO system.

The change is scheduled to be implemented after the launch of version 6.0 of the network, a software version that was launched in mid-May and that will be activated in block 1,280,000, which will occur approximately on June 13, 2021.

With BeamX DAO, the project has decided to transition to a decentralized autonomous organization model, which is useful both for the basic protocol level and for the development of the new Confidential DeFi application platform . Consequently, it will allow the joint management of the governance of the Beam protocol and the DeFi platform, in addition to managing the application ecosystem and distributing the BEAMX tokens.

Meanwhile, the price of the cryptocurrency started a sustained rise from the date of the announcement, reaching a peak of $ 0.9671 on May 28. After the corrections that are observed in the following days, the value of BEAM rises again in the last hours.

On average the cryptocurrency appreciated by more than 50% in seven days. The market capitalization is USD 65 million and the daily trade volume is USD 22 million.

Cardano launches Alonzo and prepares to integrate smart contracts
As CriptoNoticias reported this week, Input Output Hong Kong, the company behind the Cardano blockchain, announced that it has started the implementation of the Alonzo update. The process began with the testnet launch of Alonzo Blue, a network still in alpha phase that will provide connectivity to Alonzo’s core node .

Later, other test networks will arrive within this same phase: Alonzo White, Alonzo Purple —where the network will be totally public—, in addition to Alonzo Red and Alonzo Black. The goal with the full implementation of Alonzo is to enable the creation of smart contracts on this blockchain , which is projected for September of this year.

In this context, the price of the ADA cryptocurrency has been in constant advance, reaching a high of $ 1.81 on May 26. On average he won 45%. As of press time, ADA’s market capitalization is $ 50.97 billion and daily trade volume is $ 5.52 billion.

EOS community evaluates increased rewards for staking
Among the factors that appear to be influencing the EOS cryptocurrency rally this week is the recent proposal to increase staking rewards .

This fact, as noted on the EOS Twitter account, would spell the next big development for the network, after the PowerUp model , which allows users to pay a one-time transaction fee for 24 hours.

In the midst of this development, the price of the network’s cryptocurrency began steady growth on Monday, May 24. The weekly advance was over 45% , peaking at $ 7.60 on May 27.

In general, analysts consider that the cryptocurrency joins the list of currencies that are benefiting from the rally in altcoins in the last month. Also on the list are ethereum classic (ETC) and bitcoin cash (BCH). It is a group of cryptocurrencies that arouses the interest of investors as an alternative to the high costs of operating in Ethereum.

The current capitalization of EOS is USD 5.81 billion and the daily trading volume is USD 4.52 billion.