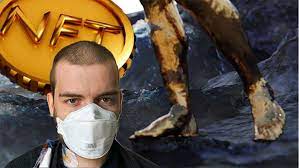 Luis Arregui Henk, a young Argentine, has taken his fight against cancer in a particular way: creating “crypto-art.” Currently, a public auction with 50 of his works has been opened on the OpenSea platform, as a means of raising funds to cover an experimental treatment against leukemia at a cost of approximately USD 500,000.

The story was picked up by the Argentine newspaper Perfil , in a direct interview with Luis Henk, or Lajos, as his friends know him. In the dialogue it was learned that the young man in 2019 already received a bone marrow donation, which was successful, but in 2020 he had a new relapse that leads him to need a new transplant, which, so far, he has not achieved to locate.

As an alternative to the difficulty of finding a donor, there is an experimental treatment called CART-T Cell. As Lajos himself mentions “they say it is the future of cancer treatment”, but because it costs more than half a million dollars, it is inaccessible for the young Argentine .

In this scenario, Lajos was prompted to make a decision, although at present he says he is stable, with very low leukemia traces, doctors insist on doing “something else.” Among the options to take are the following: do nothing and hope that the disease does not reappear, find a bone marrow donor, or opt for the experimental treatment.

The support that Lajos collects through this collection will go directly to the payment of the experimental treatment. This as long as the young person cannot find a bone marrow donor, which would be the first option to take.

If a donor is found before the fundraiser is over, Lajos says that “the resources will be used by someone else. It would be like helping two people at the same time . By this, he means that he would donate the funds to someone else in need.

Along with the sale of NFT, Lajos has an account on GofundMe and receives donations from MercadoPago directly from Argentina. All information can be found on your personal Instagram .

NFT and the world of «Crypto-art»
In the midst of this tirade, Lajos almost by chance and through YouTube videos – according to the young man – came across the world of NFTs. While receiving treatment at the hospital, Lajos ventured into the world of 3D modeling to channel his emotional charge and thus be able to “generate something to give to the people who are helping me,” as the young man declares for the Profile portal.

In this way, Lajos decided to create about 50 works to be sold as an NFT. The promotion was made through his personal Instagram, whose publication achieved more than 100,000 views.

At the time of writing, two of the young man’s works, Spaceman Alex and Goddess of Health Lucky Token, were sold for a total amount of 1.33 ETH, equivalent to $ 3,000.

Likewise, along with the publication on the OpenSea platform, Lajos has also published an exhibition on the Decentraland platform , in which a virtual room was created in which some of his works are observed.

This event was organized exclusively to help raise money to pay for MrFarkasOfficial’s (Lajos Arregui Henk) cancer treatment. Each work in the collection was created in a hospital on a Dell laptop, channeling all the emotions of a man facing death.

Promotional text of the Lajos exhibition in Decentraland.
Decentraland, meanwhile, is a tokenized open world game, in which players can buy “lands” where they can create their own game rooms. A variety of virtual events have been launched there, including a Soccer World Cup, an event that was reported by CriptoNoticias at the time.